What Is Verbal Bullying ?

Verbal bullying is a way to make people feel vulnerable with words. Everything about this type of bullying is done by speaking, it doesn't include physical contact. It can take the form of name-calling, spreading rumors and making fun of other people. This form of bullying is hard to bring to an end because it is very difficult for authority figures to find out who is the bully since there's no physical contact. Verbal bullying can have psychological effects and cause many problems for the victim. 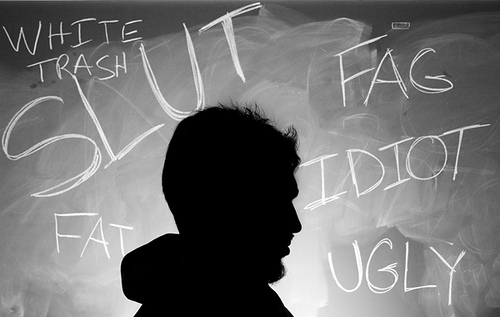 hat kid you just insulted this morning, he's feeling insecure, yet you don't care no matter how much time we have told you words can leave an eternal scar.

During lunch, he felt humiliated by the surrounding laughers caused by one of your negative jokes about him.

He wishes he could just hide from the dark bitter world you caused.

At home, he pretends he had a good day at school so his parents won't worry.

But the minute he's alone, tears spread out of his eyes and onto the pillow he buried his face into; he's broken, emotional, devasted, scared that it will repeat and worst of all, he hates himself. He believes what you say since his self-esteem is at the lowest.

It's only the first day; make it stop before it gets worst. You wouldn't want to feel like that, trust me!

We are Collège Notre-Dame 8th grade students who find bullying even worse than a crime. We wrote this blog to honour the victims of these horrible tragedies and to bring verbal bullying to an end. Since one of our teammates has been a victim, we can assure you  that the effects of this form of bullying are indescribable. Also, victims avoid school in fear of bullies and we consider that every student has the right to education. Researchers discovered that 50% of all children have been bullied. So once and for all, let's stop verbal bullying!
Posted by Unknown at 12:03 PM 2 comments:

Being victim of verbal bullying is very hard.  Even though it takes a lot of courage, here are useful advice that may help the victims to deal with verbal bullying.

The victim should ignore the bully and stay calm because if the victim isn't reponsive, the bully will lose interest and will probably stop bullying.

It could also be a relief and make things easier if the victim tells an authority figure about the problem and asks for help.

The victim should also focus on his or her faithful friends to have some positive influences.  A victim who's surrounded by friends can bring verbal bullying to an end.

Finally, looking for other sources of pleasure such as hobbies, fun activities and interests can help the victim to think about positive things and to stop thinking about the bad things he or she went through.

Bullies can be difficult to get over, that's why there are actions to do and not to do.
A situation very common in victims is that they always think it will stop... but they are wrong. It will only get worse unless the victim does something about it.

When being bullied, you should always speak up. This means that you should always tell a trusted adult; someone that could help you conquer and forget about this problem. Another way to show indifference to a bully is to show high self-esteem.

Facing someone who is bullying alone is the worst case scenario because bullies will bully even more due to the adrenaline you gave.

There is another problem, kids become bullies because of the lack in interest or aggressiveness from their parents. Therefore, I believe that parents have an important role in this reality too. 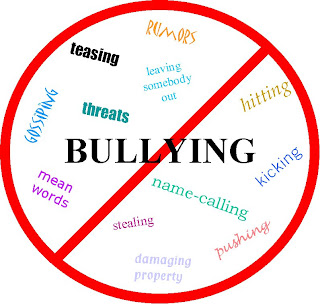 Posted by Unknown at 7:11 PM No comments:

Verbal bullying can hurt as much as physical bullying, it is just a different kind of pain. All types of bullying generally have the same consequences. The most deadly consequence is suicide. Verbal bullying is insulting people, speaking to them in a disrespectful way.

This type of bullying can lead to many other consequences. The victim is no longer self confident, they look back at those memories of being bullied almost everyday. Every mean thing the bullies said to them will be believed by the victim for a long time. They will become very negative and maybe even become a bully in the future. They never tell anyone because they are to scared. Bullying could cause the option for the victims to commit suicide. His friends and family won't ever know why he did that action to himself and they would because they won't ever know what exactly happened to him.